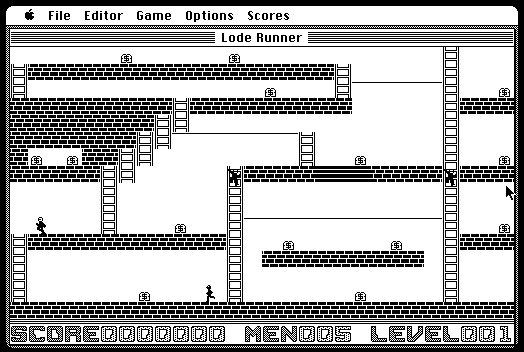 Lode Runner is a platform video game first published by Brøderbund in 1983. Unlike later platformers which rely on precision jumping and movement, levels in Lode Runner are puzzle-oriented. It is one of the first games to include a level editor, a feature that allows players to create their own levels for the game. This feature bolstered the game's popularity, as magazines such as Computer Gaming World held contests to see who could build the best level.
The prototype of what later became Lode Runner was a game developed by Douglas E. Smith of Renton, Washington, who at the time was an architecture student at the University of Washington. This prototype, called Kong, was written for a Prime Computer 550 minicomputer limited to one building on the UW campus. Shortly thereafter, Kong was ported to VAX minicomputers, as there were more terminals available on campus. The game was programmed in Fortran and used ASCII character graphics. When Kong was ported to the VAX, some Pascal sections were mixed into the original Fortran code.
Over one weekend in 1982, Smith was able to build a crude, playable version in 6502 assembly language on an Apple II+ and renamed the game Miner. Through the end of the year, he refined that version, which was black-and-white with no joystick support. He submitted a rough version to Brøderbund around October 1982 and received a one-line rejection letter in response to the effect of "Thank you for submitting your game concept. Unfortunately it does not fit within our product line.".
Smith then borrowed money to purchase a color monitor and joystick and continued to improve the game. Around Christmas of 1982, he submitted the game, now renamed Lode Runner, to four publishers and quickly received offers from all four: Sierra, Sirius, Synergistic, and Brøderbund. He took the deal with Brøderbund.
A port for the original 128k Macintosh followed in 1984; it will run on machines up to OS 6 and can also be used on System 7 with a patch.

The Bungeling Empire has stolen a huge cache of gold from its rightful owners, and your mission is to infiltrate its treasury and recapture it. This entails progressing through 150 screens of platforms, ladders and ropes.

The Empire has sent robotic guards down to protect the gold, and contact with any of these will cost you a life. Your method of escaping them is to press fire to dig a hole in their line of movement, thus causing them to fall in briefly, allowing you to move across the gap safely. Once all the gold has been collected, a ladder allowing you to move onto the next screen is added. Completing these screens often requires forward planning and precision.

This was one of the earliest games to include a level editor, allowing the creation of new level designs with no programming skill.